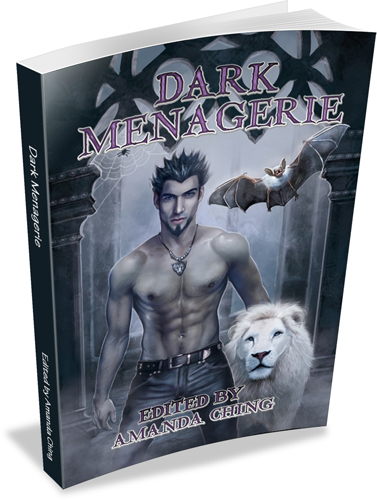 Contains “The Four of Us” by Lor Rose from Storm Moon Press.

A shifter leads two lives: one as a human, and one as an animal. Sometimes these lives are intertwined, and sometimes they are not, but always the shifter has to find a way to reconcile one with the other. Dark Menagerie follows characters as they explore the darker side of what it means to have one foot in the animal world and one foot in the human world. Some struggle to keep the animal starkly separate from their lives as a human being, but for others, their shifting leads them to a darker corner of the mind where human and animal are nearly indistinguishable.
First, in Dominant, Kade has left everything he valued in his life behind; his family, his fiancée, his entire future. He tries to make peace with what he has become by running away to a small town, but fails. Then, a monster in a suit walks into his life, a monster just like him. Then, the four in The Four of Us devised a game: pick two humans, lure them in, and hunt them down. The game, the shared thrill of the hunt, was what brought them together, but also what threatens to tear them apart.

Justin, of Horsefeathers, had one job—to get a new Mustang for his boss’ ranch. But at the holding pens, he can’t look away from a stunning stallion. He isn’t at all what the boss wants, but Justin can’t say no. He soon learns that he’s brought back much more than simply a beautiful horse, and that there are some legends that he wished weren’t based in truth. Finally, Breathe concerns a young dolphin shapeshifter who has to deal with his own hateful feelings about himself, a deadly dull partner, and the presence of a new shifter in town. And a hurricane bearing down on their home in Key West, of course.

It felt sort of wrong and well, creepy to root for the couples– This story was very fitting for Halloween, the elements worked really well and that made the story a pleasant surprise; but because of how the characters are constructed, who they are, it made me feel wrong about their happy ending. – 4.5 Stars