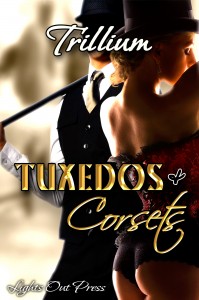 Tuxedos and Corsets by Trillium
Lights Out Press
Novella
Purchase on Amazon
Roses: 4

Can a kinky couple catch the culprit?

Maura Briggs has only one goal–to get her PI license, open her own agency and protect abused women, but the attitudes of 1960s New York City and her own submissive desires keep getting in the way. She’s sworn off the S&M scene after being beaten by her last master. But she wasn’t counting on her new boss.

Mike Drake needs to resuscitate his detective agency. His new client appears to be perfectly poised to help him. Faberge eggs are disappearing during the gentleman’s soirees. He wants Mike to come to the next party and catch the thief. There’s only one problem. The client wants Drake’s new secretary to attend with him–dressed in a corset, stockings, heels and…nothing else.

Trillium’s latest work Tuxedos and Corsets follows Maura and Mike on their journey to each other. After the last book I reviewed for her I was on the fence about this one but Trillium is a friend. After starting this book I didn’t want to stop but they’re are a few flaws.

Normally I read M/M romance almost exclusively. If anything is M/F it’s because a friend wrote it or recommended to me by multiple friends but this one I’d want to read if I didn’t know Trillium. It’s around 30,000 words, a fast read for me, but I enjoyed it. I think I could’ve enjoyed it more if extended and built upon. The progression between the two main characters is fast but under the circumstances it’s necessary.

One aspect that truly tripped up is the year isn’t mentioned in the book. A subtle article in the paper gives the reader a general time of the book but if someone doesn’t know their history (or simple not thinking about it or miss it) then the coming chapters are very confusing as to how Maura is treated. I mentioned this to Trillium and she said it would be addressed, if  at the time of this review I don’t know or she may not at all.

Overall I give it a four roses. A hard won victory from me. I’m generally a three rose kind of gal.